Our economy is at an inflection point...

Digital and Green technologies are transforming our lives and our society. Acknowledging that the broader use of Innovation and the acquisition and smart use of 21st Century skills can boost economic growth, job creation, entrepreneurship and efficient operation of the public sector leading to Greece’s transformation, a broad alliance has been established that addresses women’s economic empowerment and women entrepreneurship.

Based on the needs expressed by women entrepreneurs, the Greek Government has encouraged networking and exchanges of good practices, as well as initiatives that help women build confidence in their abilities. On April 16th, 2021, Greek Deputy Minister of Labour Ms Maria SYRENGELA and a broad alliance of public-private actors, academia and non-profit organizations in partnership with the European Centre for Women and Technology – ECWT Norway announced launching of the Greek Innovation Lab for Women (#GIL4W).

This proposal for setting up a Greek Innovation Lab for Women™ is based on relevant initiatives and collaboration between the Deputy Minister of Labour and Social Affairs responsible for Demography, Family Policy and Gender Equality and leading key actors of the Greek Innovation ecosystem and the European Centre for Women and Technology – ECWT, based in Oslo, Norway during the years 2010-2020 and has been supported by the European Commission DG Grow and DG Connect, the Norwegian Ministry of Foreign Affairs, the EEA & Norway Grants.

#GIL4W established in a collaborative and participatory way, it will be implemented as a transfer of knowledge project and based on a tested concept the Greek Innovation Lab for Women™ #GIL4W. The key target group and the general public will together co-create the vision, mission, guiding principles, and the four pillars and shape the core activities and impact of the planned Innovation Lab.

#GIL4W is a multi-stakeholder initiative, providing a propitious organisational environment inside the Greek public and private sector that acts as a precondition to fully reap the benefits of Innovation and digital technologies in order to enhance productivity and growth of the Greek economy. By bringing together Greek National stakeholders as members under the same umbrella, it is the first and largest of its kind in Greece.

To this goal, the #GIL4W coalition, in collaboration with major national stakeholders, has set off to develop a functional ecosystem that includes policy makers, academia, entrepreneurs and businesses, in order to assist in the implementation of structural reforms and actions to promote growth and help the best and brightest female talents shine.

#GIL4W will create a space where members can share tools, lessons learned, business bases and rapidly push forward innovative practices. They are encouraged to set their own specific targets to:

It is very critical that #GIL4W is starkly responsive to combatting the negative impact of the pandemics and COVID-19 on the female labour market. And supporting the Post-COVID recovery in Greece. To this end, all the members are willing to contribute with their resources and expertise in addressing current challenges, valorising research and AI and respective market potential.

ECWT is the Co-founder and initiator of the #GIL4W model.

#GIL4W is open to any private or public actor, academia and non-profit actor that shares the objectives and purposes of the #GIL4W pledge and desires to provide an added value.

According to the #GIL4W signed MoU, it will be supervised by the Cabinet of the Deputy Ministry of Labour and Social Affairs and will be hosted at the premises of Athena Research & Innovation Center in Information Communication & Knowledge Technologies.

On Behalf of the Deputy Minister of Labour and Social Affairs

For the Hosting Organization ATHENA RIC 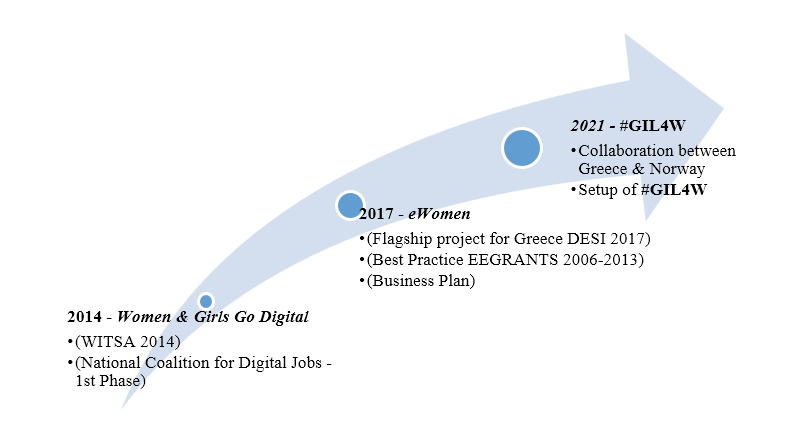 In order to confront the negative statistics and trends regarding women´s involvement in STEM and the Digital Transformation of the Greek economy, several of the founders of the #GIL4W Alliance and EU actors have since year 2012, carried out a systematic work and successfully carried out two set of actions:

Initiated under the Greek EU Presidency, the “Women and Girls Go Digital” – WGGD coalition was launched under the European Commission´s Grand Coalition for Digital Jobs, on the 4th April 2014 in Athens. WGGD was a multi-stakeholder public, private, academia and non-profit initiative co-founded by ECWT, aiming at boosting female entrepreneurship and employment in the ICT and the digital economy sectors.

WGGD has in 2014 presented a detailed action plan for diminishing the digital gender gap which in September 2014 was awarded by the World Information Technology and Services Alliance the WITSA Global ICT Excellence Award in the category of “Digital Opportunity” at the 19th WITSA Conference held in Mexico City. The award is granted to institutions and enterprises that capitalize on ICT innovation for the benefit of the public sector and the citizens, creating new opportunities for employment and sustainable development.

IN 2016-2017 the EEA & Norway Grants co-financed the e-Women project (Project Nr.3889/ 2015-2017) led by the General Secretariat for Gender Equality, The National Center for Scientific Research “Demokritos”, The Federation of Hellenic Information Technology & Communications Enterprises (SEPE) and CRE.THI.DEV and with ECWT as the Norwegian expert partner aimed at “bringing more women into digital jobs in Greece, benefitting thereby the digital industry, women themselves and Europe’s economy”. The project led to the preparation of a Feasibility Study to set up an Innovation Center for women in Greece. The study presented a detailed market analysis, business plan and marketing plan for realizing the project. e-Women has been selected as a flagship project for the EC’s DESI 2017.

In defining the Action Plan’s main pillars, priorities and strategic objectives, all the founding members have been asked to submit their recommendations taking into account the Greek national policy and E.U. principles and guidelines such as shared concept notes on digital skills, so that specific targeted actions to be discussed and evaluated under specific criteria and KPIs.